A trip to the caves of Toirano 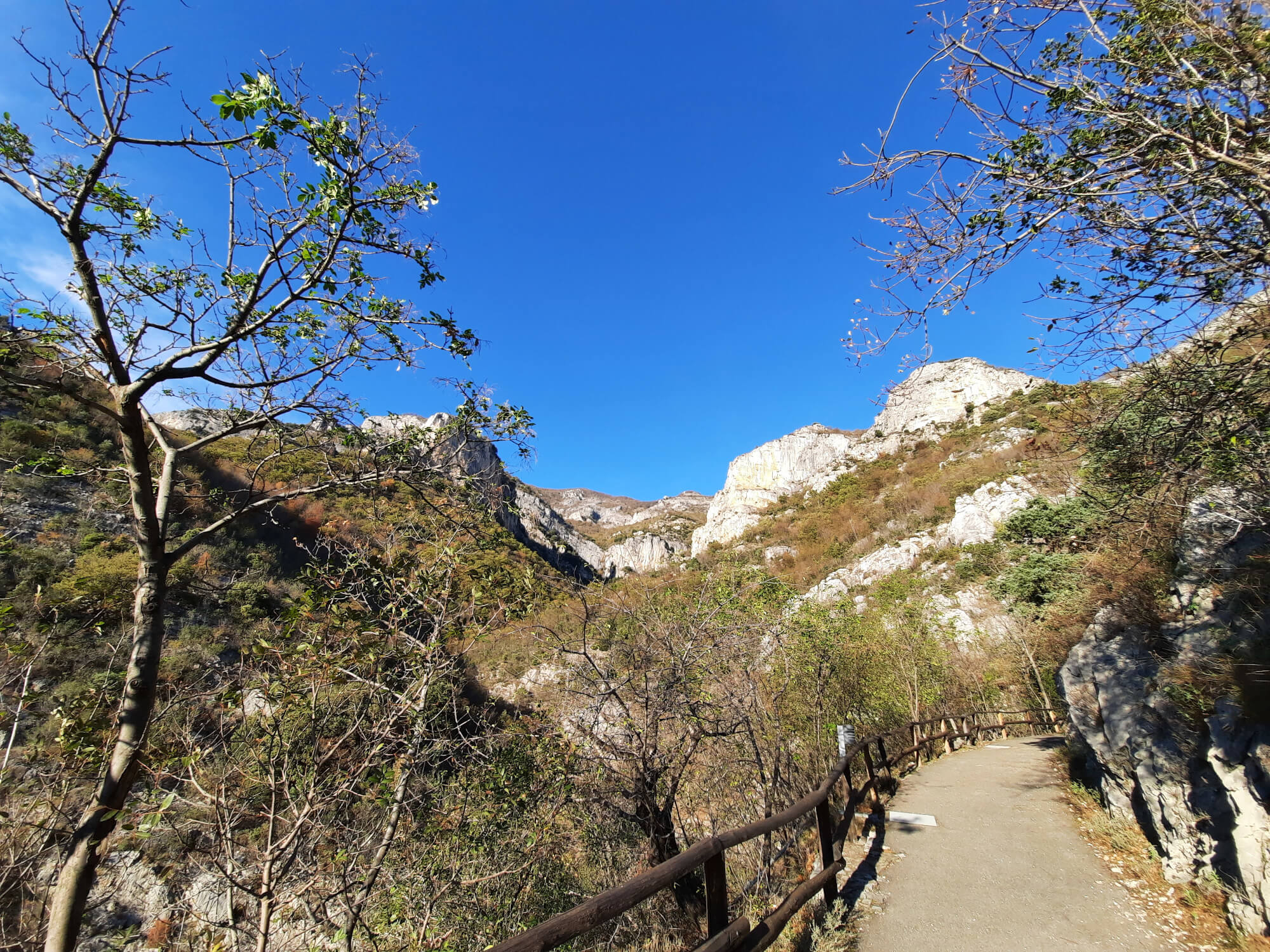 A trip to the caves of Toirano

After the beautiful visit to the Ethnographic Museum, we did not miss the opportunity to visit the Toirano caves, one of the major tourist attractions in the area. It is a site of great beauty and historical importance, as well as naturalistic. Here, in fact, there are traces of the first human settlements (homo heidelbergensis and Neanderthal), dating back some 300,000 years, but not only. The caves of Toirano, in fact, guard what is considered the largest cemetery of cave bears in Europe.

In short, we will take you to the underground caves of Toirano, back in time for thousands of years, to discover places so surprising that they seem fantastic, through tunnels and galleries full of concretions of the most unusual shapes. And all just a few kilometres from our farmholidays in Diano Marina! 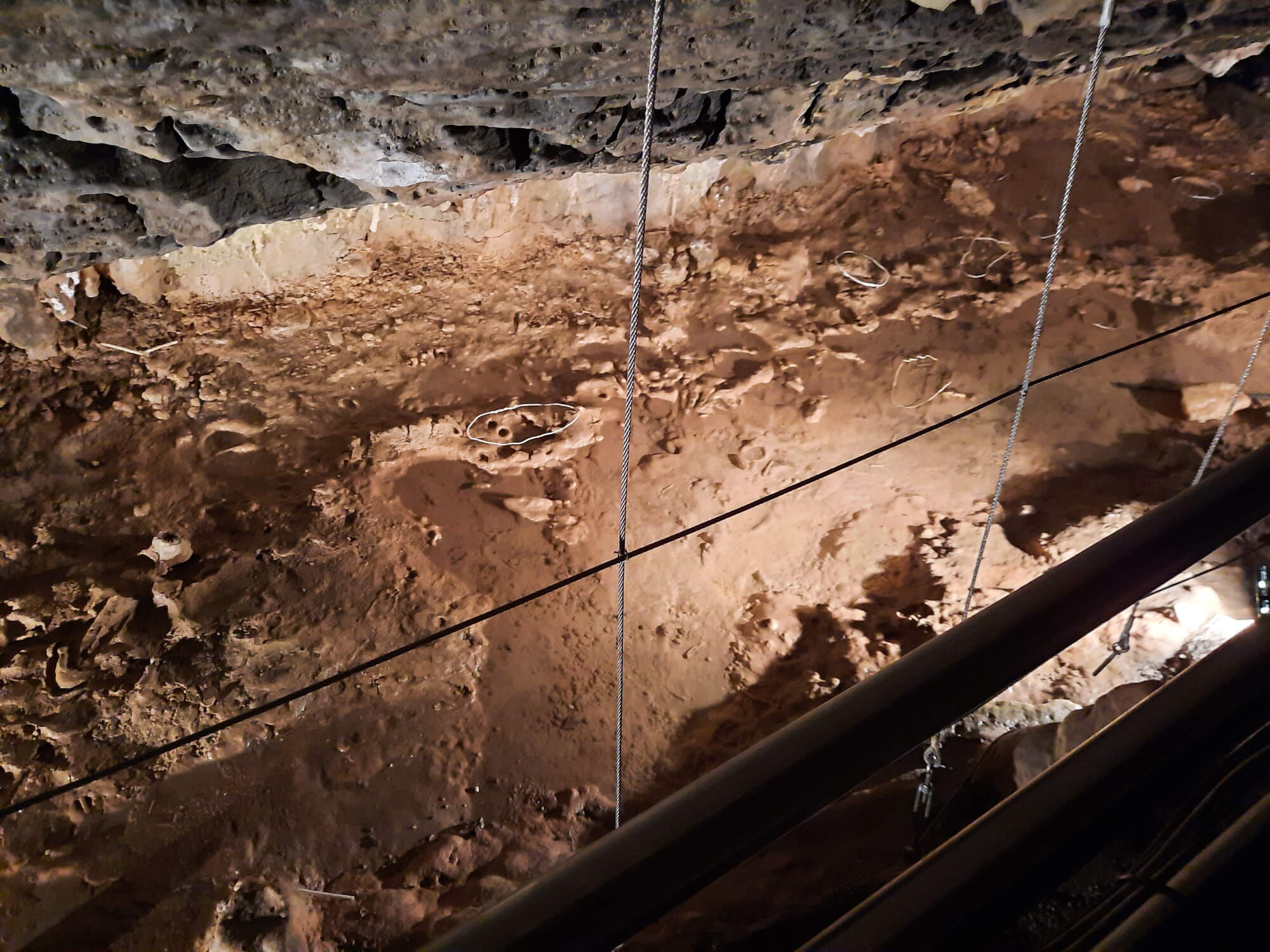 With more than 100,000 visitors a year, the Toirano caves are one of the most popular sites for tourists visiting Western Liguria. There are fifty natural caves within a complex of grey dolomitic limestone, which have been open to the public since the 1950s and are managed directly by the municipality of Toirano.

Thanks to their natural conformation, these caves have been an excellent refuge for bears during the winter season. This is demonstrated by the numerous bones, as well as footprints and scratches on the stone, which can be traced back to these animals. More recent are the remains of Homo heidelbergensis (300,000 years ago), Neanderthal (80,000 to 40,000 years ago), and Sapiens (around 12,000 years ago). The latter human species probably used the caves for magical-ritual purposes, as would be evidenced by footprints, fingerprints and charcoal traces on the walls. 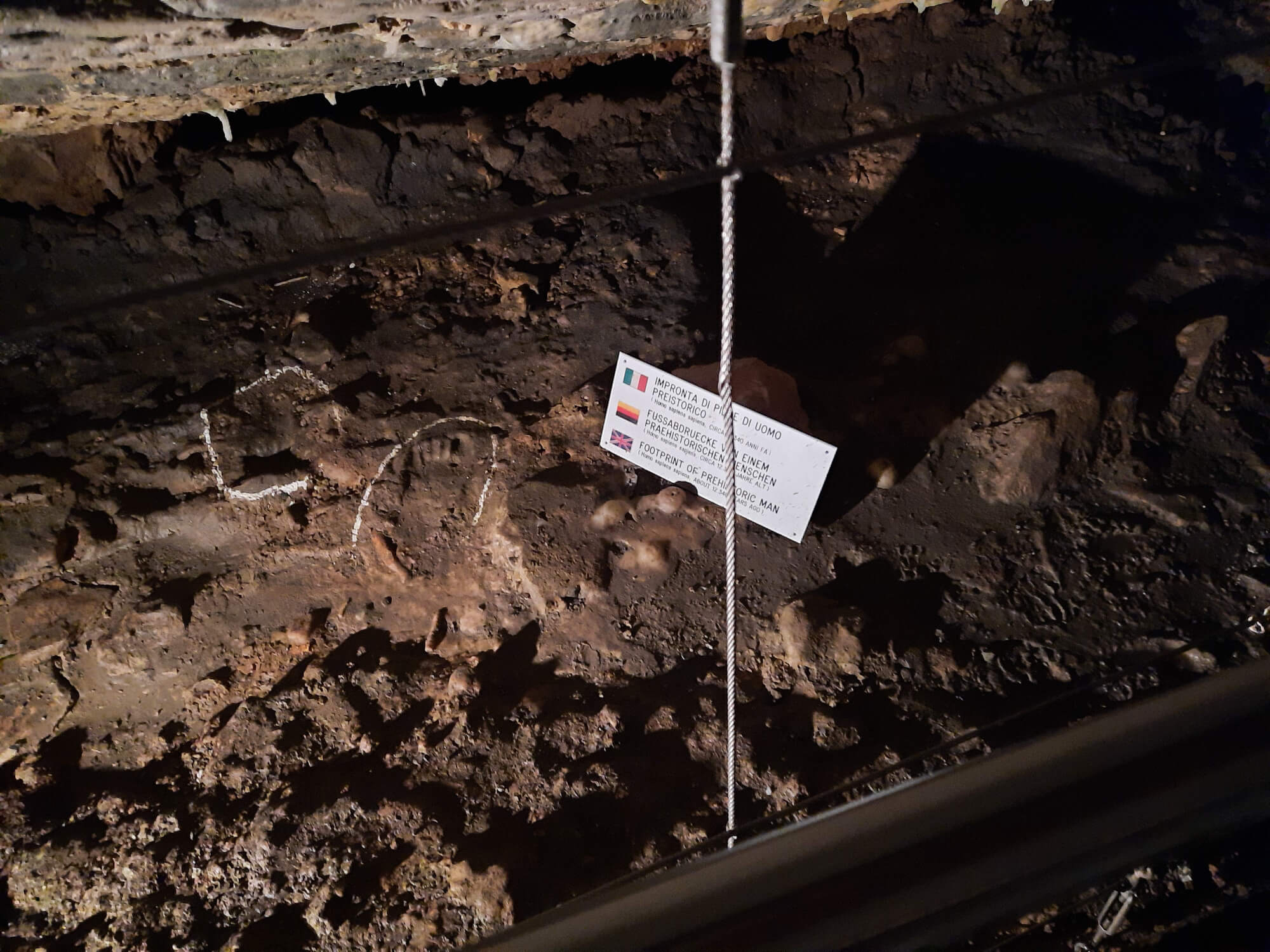 We visited the caves of Toirano with a guide of the site who led us through the various rooms, illustrating the peculiarities of the stalagmites and stalactites present, with anecdotes and scientific explanations accessible to young and old. The ticket costs €15, but there is a €2 discount if you visit the Ethnographic Museum first.

Also known as the witch's cave ("basura" means witch in Ligurian dialect), it was the first cave to be investigated by Canon Nicolò Morelli and certainly the most fascinating. This is because it consists of numerous internal rooms and corridors full of marvellous natural concretions in which to lose oneself guessing at possible analogies with reality. 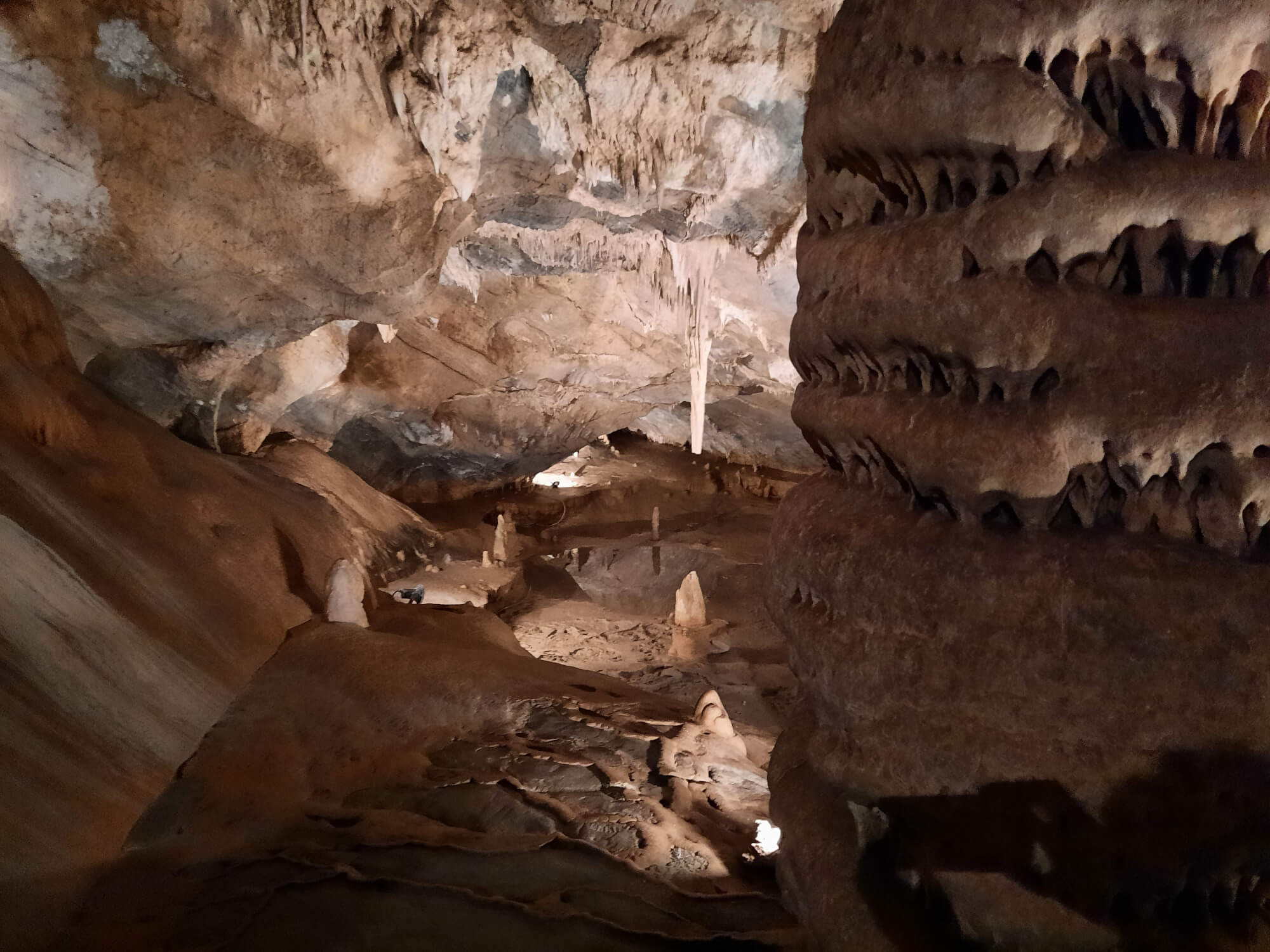 The route winds along a corridor in which it is possible to identify prehistoric footprints belonging to the first human species, while further on one can observe the remains of cave bears. Further down the corridor, in the so-called 'hall of mysteries', are the footprints mentioned earlier, linked to the cult of our primitive ancestors. Around 1960 the last part of the cave of Bàsura was discovered, known as the cavern of Cybele, an enormous alabaster flow with very rare mamelon concretions. 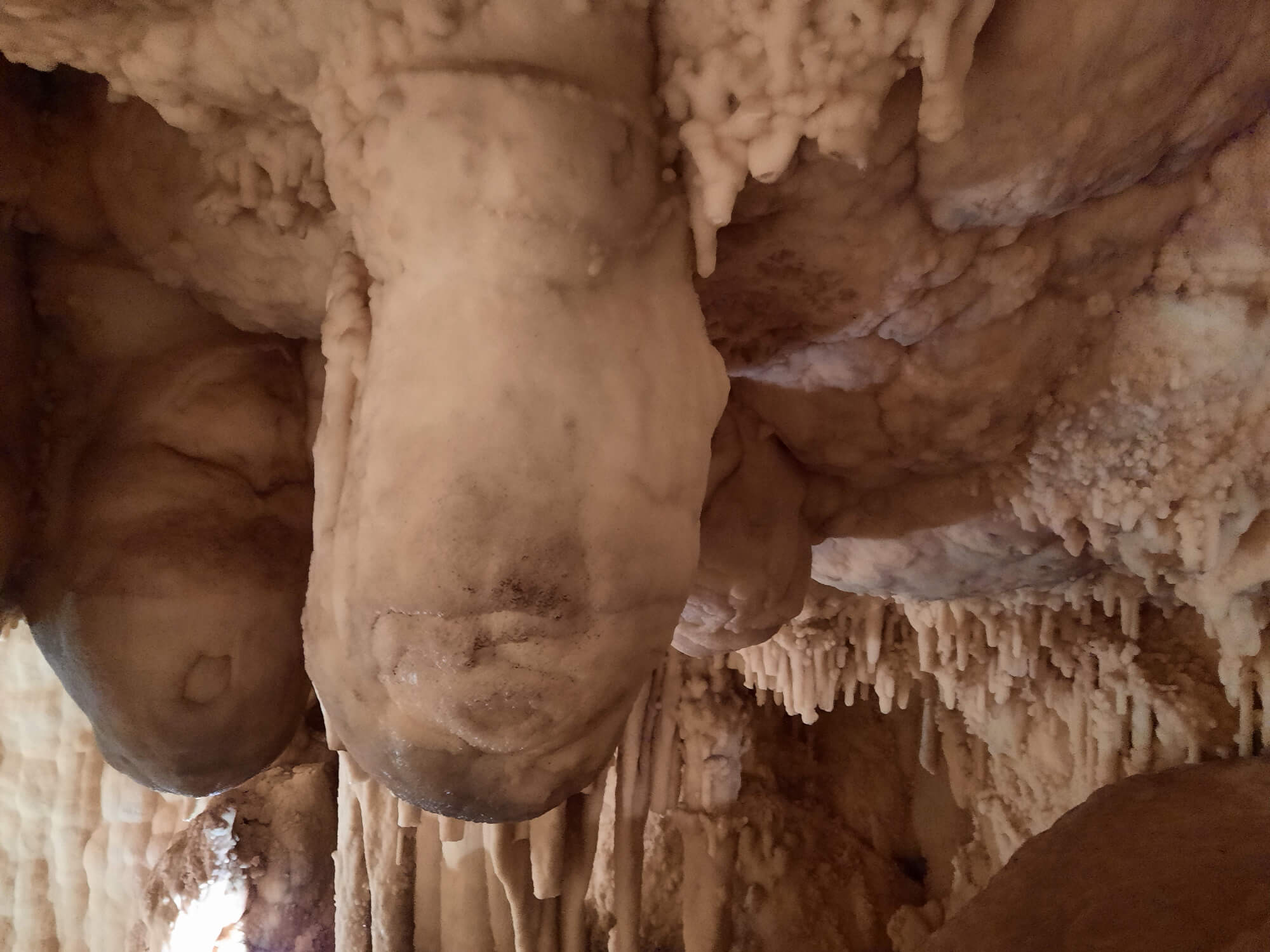 In this video we can see a part of the guided tour inside the Bàsura cave, precisely in the room called "L'antro di Cibele". The guide explains the curious "mamelon" shape of the stalactites, which are unique in Europe, and the reasons for their origin.

Through a tunnel of about 120 metres it is possible to reach St Lucia's cave, divided into a lower part, discovered and excavated in the 1960s, and an upper part, known since the Middle Ages and in which a sanctuary has been created. 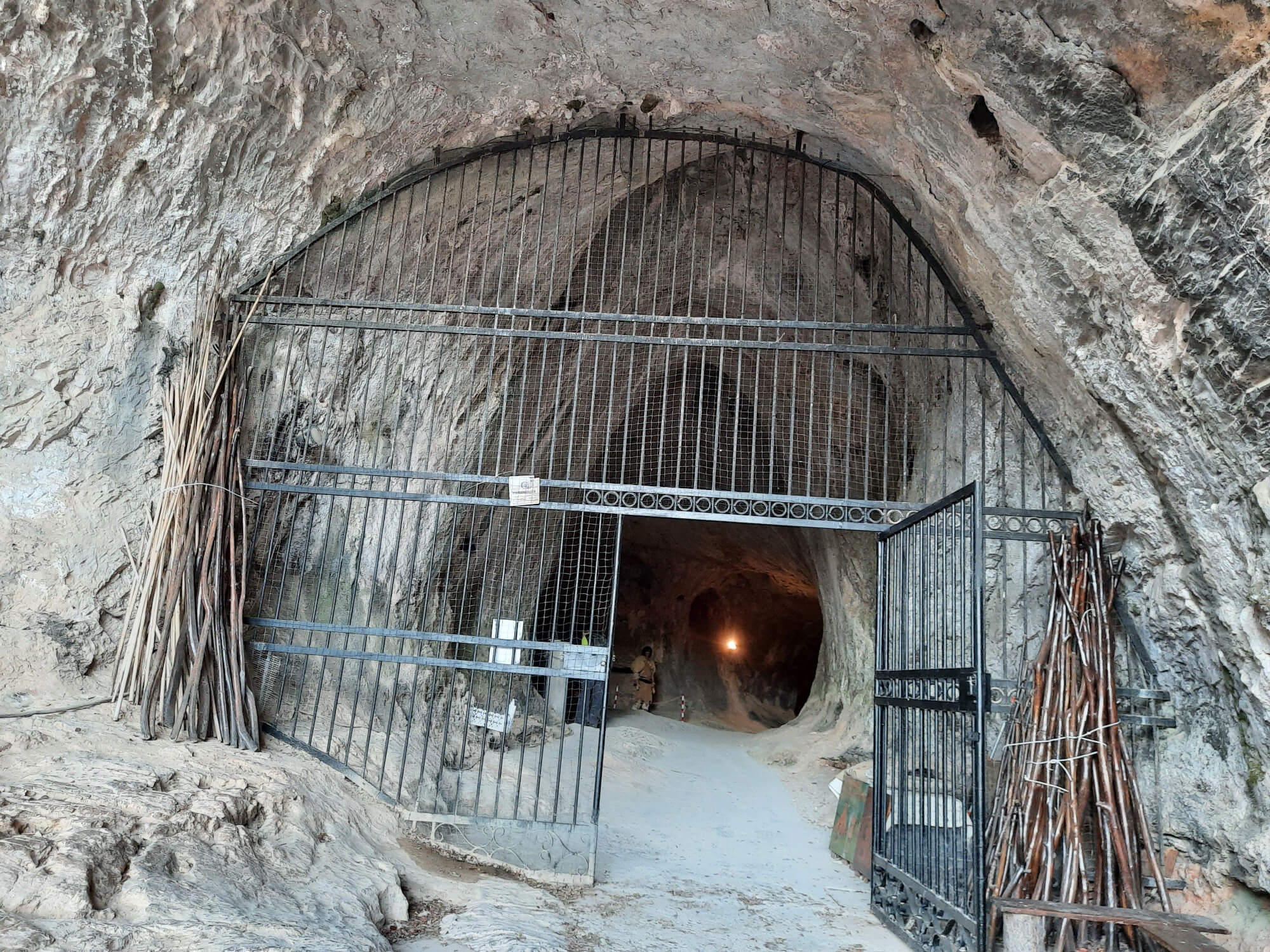 In the depths of the lower cave there is access to a series of inner rooms:

These are surprising places, full of curious formations of aragonite crystals on the walls, which take on the appearance of flowers. The last room, known as the "capitals" room, is particularly interesting because it is linked to a series of initiatives, such as concerts (thanks to its acoustics) and wine tastings, the latter offered by the Durin winery of Ortovero (Albenga). 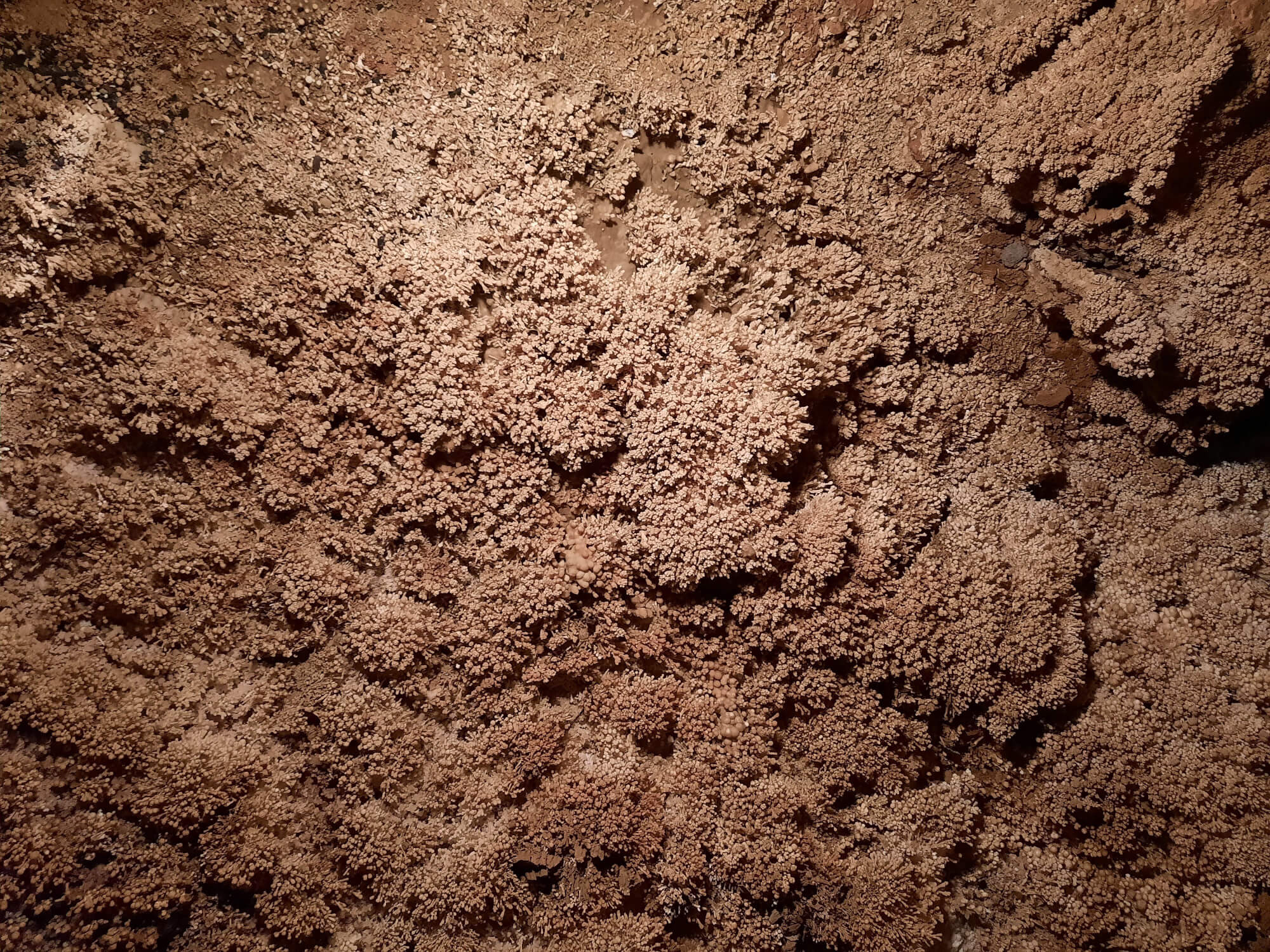 In the upper cave, on the other hand, there are still numerous human traces, footprints and objects that testify to the presence of settlements that can be traced back to Homo heidelbergensis and Neanderthal.

Finally, we must mention the Cave of Columbus, which is part of the same limestone massif as the Cave of Bàsura. Consisting of a gallery of about 50 metres, it connects to a vast environment and, although not open to the public, is of considerable importance due to the presence of numerous human remains, from the Lower Palaeolithic to the Neolithic.

The caves of Toirano are a living place full of mysteries waiting to be investigated. Despite the great strides made since the first studies by the Darwinist canonist Nicolò Morelli, scholars from all over the world still habitually visit the caves to try to resolve certain uncertainties about the nature of the human settlements inside them.

A naturalistic and prehistoric site of undoubted fascination, just waiting to be discovered! 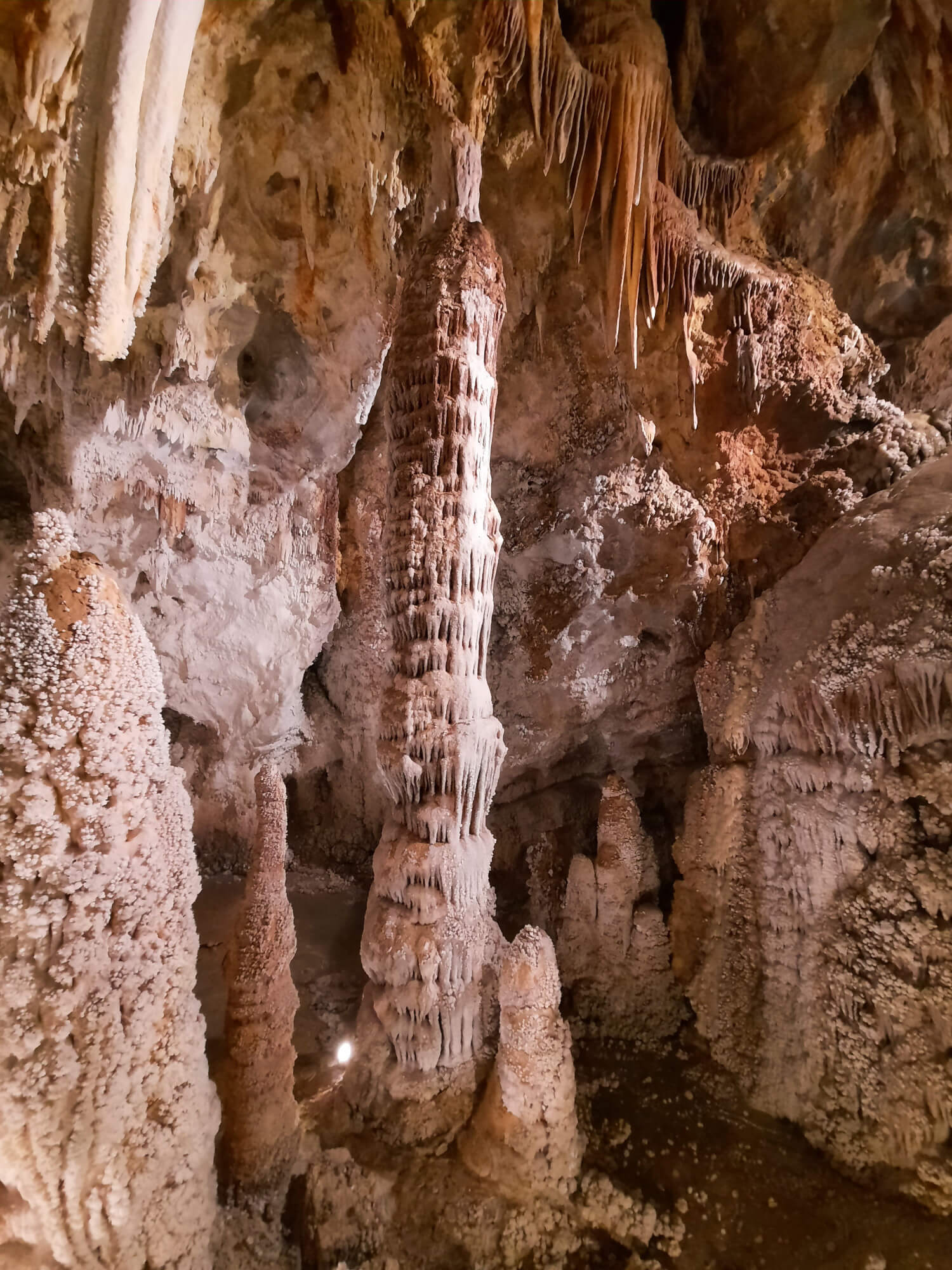 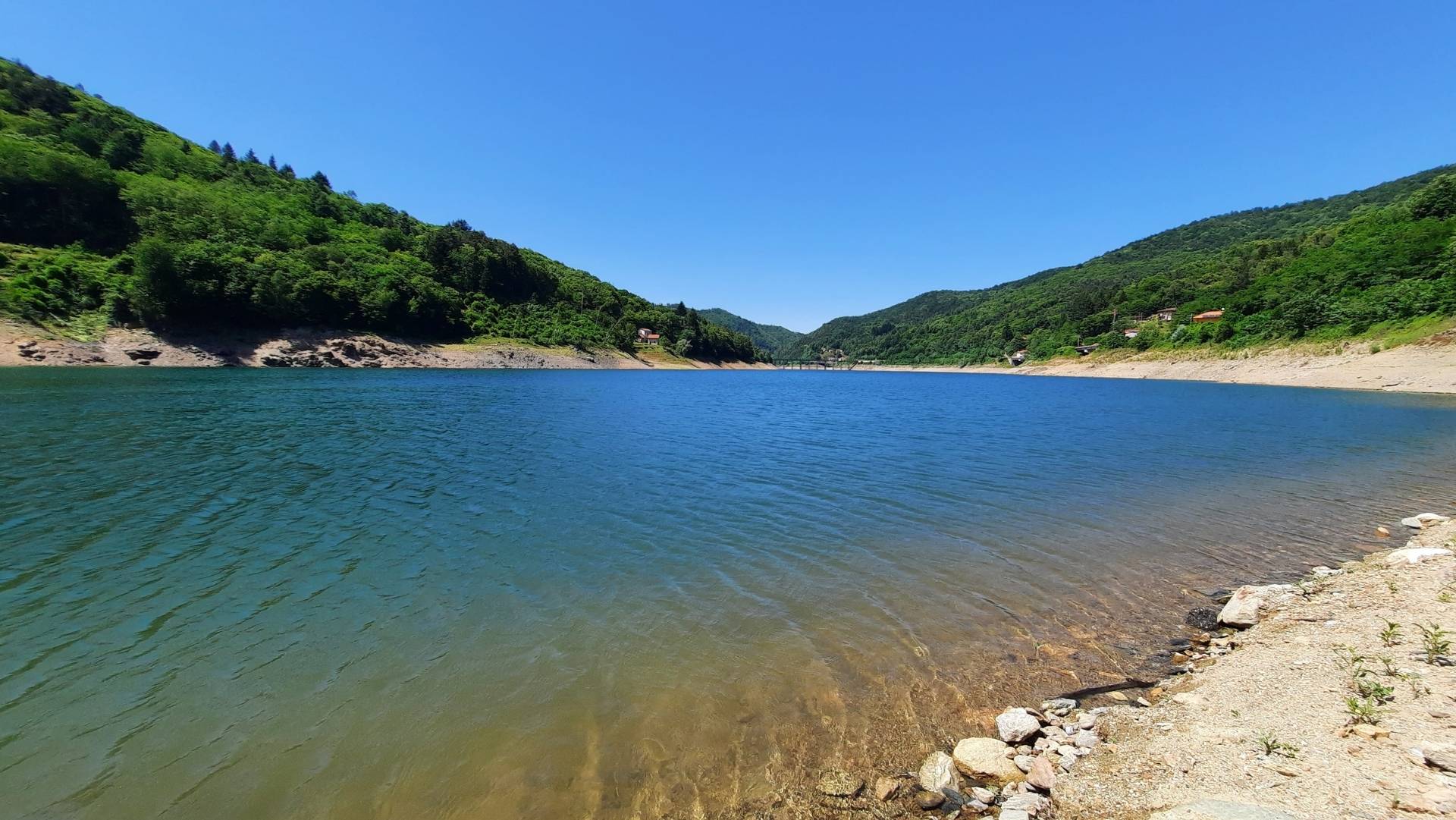 Lake Osiglia: between the present to experience and a past to remember

We and our guests like to indulge in a trip out of town to discover our immediate surroundings; this ...
Discover ➔ 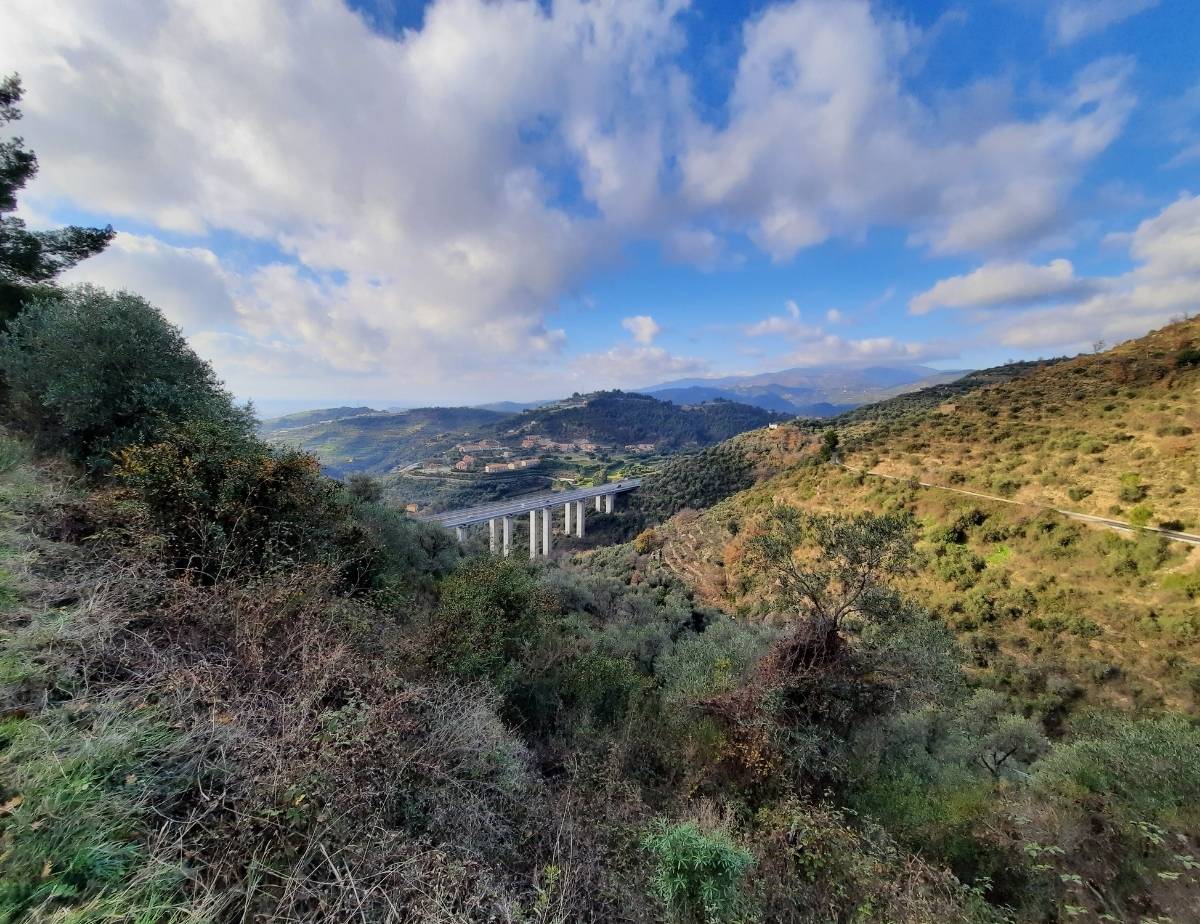 If you stay in our farmhouse you can have many experiences: today we tell you about the trekking rou ...
Discover ➔ 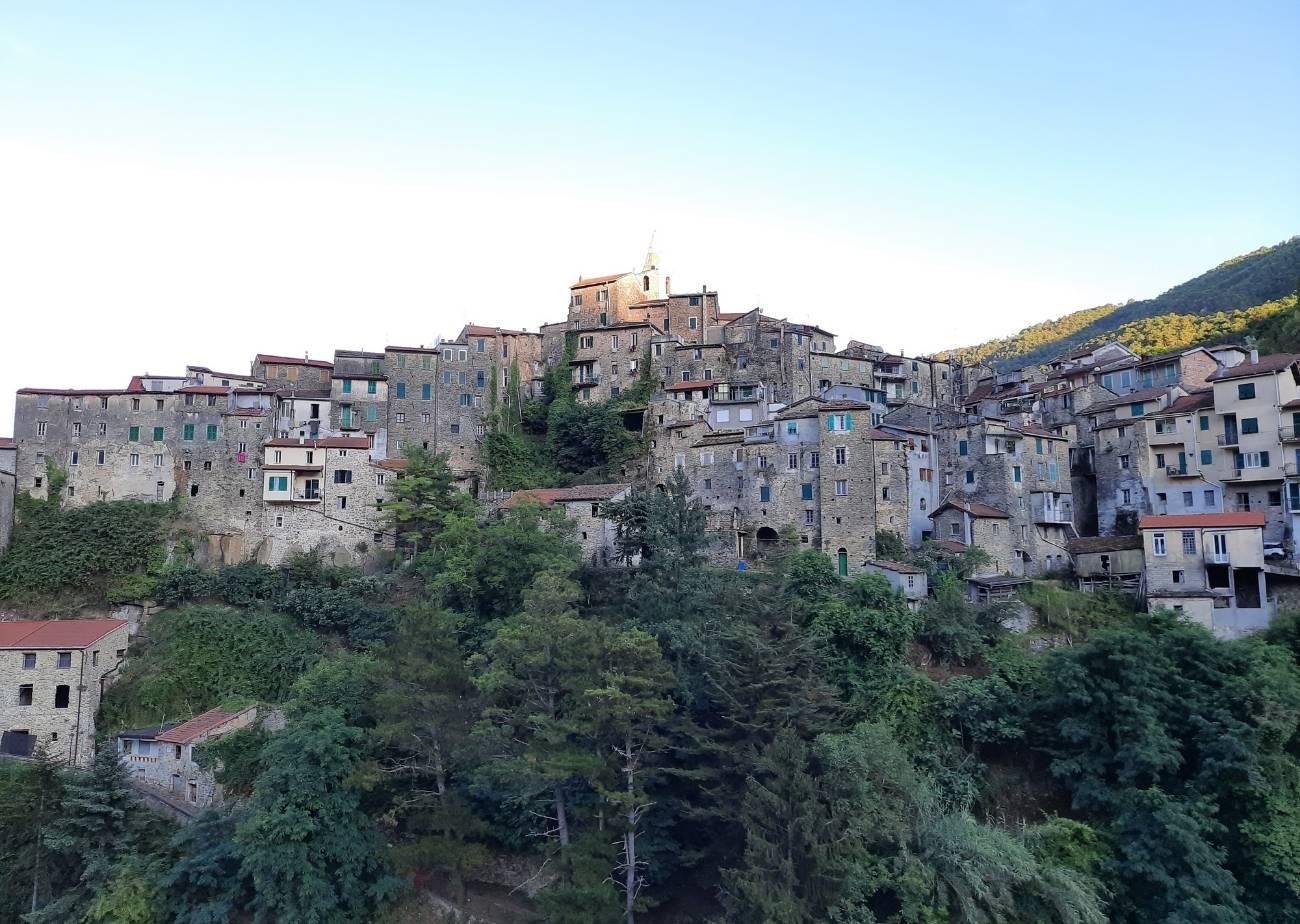 Ceriana: an ancient village guardian of timeless history and culture

Near the Le Girandole holiday farm, there are an infinite number of places to discover. Today we are ...
Discover ➔